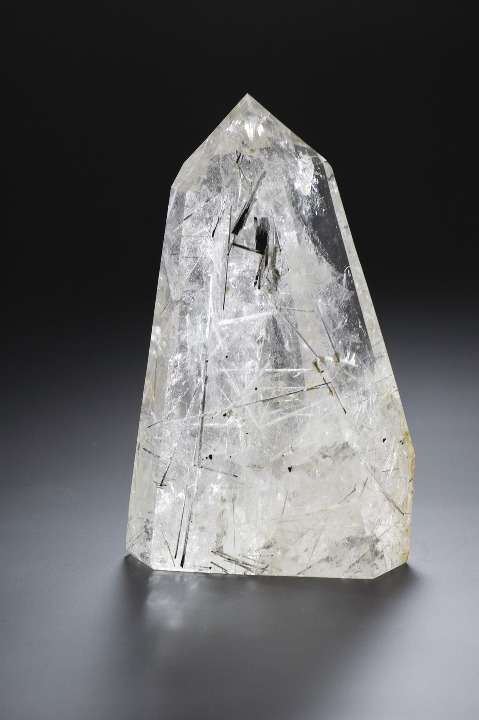 2015 heralds a new rendezvous with history. The Manufacture can now look back on 260 years of uninterrupted creative activity and is celebrating this milestone by a sparkling tribute to the decorative arts that have significantly contributed to its enduring success. A collection of 12 unique crystal table clocks resembling luminous arches is one of the means by which Vacheron Constantin is demonstrating the twin mastery of Haute Horlogerie and artistic crafts for which it has become a prominent ambassador over successive generations.
For almost two and a half centuries, Vacheron Constantin has been imagining and developing the finest testimonials to horology. Each of its creations is meticulously registered in its archives spanning the long history of the venerable House. 2015 brings a new milestone marking 260 years of uninterrupted history. On this occasion, the Manufacture is celebrating its boldness and expertise with new creations in the Métiers d’Art collection: 12 crystal table clocks. Each is equipped with a new Vacheron Constantin movement comprising a constant-force mechanism and a 30-day power reserve. The series will be progressively unveiled throughout this exceptional year and the first rock crystal model is being given an exclusive preview at the SIHH.

Over the decades, the democratisation of the wristwatch has resulted in a progressive slow-down in the production of table clocks. The latter have nonetheless found their place as mechanical works of art providing a broad field of expression for various artistic techniques. The Manufacture has found in their generous dimensions an ideal medium through which to convey the full force of its cultural commitment in the realm of the decorative arts. Inspired by a model dating back to 1933, Vacheron Constantin has chosen to explore the many facets of crystal: translucent crystal for its purity that lends itself admirably to being enhanced by artistic crafts; and rock crystal for its natural rarity and its mineral richness. They provide a wonderful playground in which to demonstrate the excellence of the artistic crafts cultivated by Vacheron Constantin. As usual, the exterior stems from a fruitful dialogue between master-watchmakers and crystal-glassmakers, as well as stone-hunters and stone-cutters, guillocheurs, engravers and enamellists – an array of master-artisans that the Manufacture delights in challenging to reach new heights of achievement.

While the 12 table clocks each beat to the pace of the same movement, each crystal arch reveals a unique expression. Four of them celebrate the natural beauty of rock crystal, evoking a “mineral” architecture shaped by the Earth across endless ages.
Only exceptional stones are selected for their optical quality, their colour, their radiance, their refractive index and the aesthetic harmony of their inclusions. They illustrate various mineral variations, in turn revealing an evanescent white, an amber-tinted shade, fascinating black tourmaline inclusions known as “Arrows of Love”, or stunningly beautiful golden titanium “Venus Hair” inclusions. The eight other table clocks, in translucent crystal, revisit a variety of architectural movements: Orientalism, Art Nouveau, Art Deco, Op Art, Post-Modernism, Deconstructivism, Green Architecture and Utopianism. These decorative themes adorn the crystal arch of the table clock.

Exceptionnal stones have been patiently cut and facetted to reveal the geological mineral process that has shaped it. Rare gem-hunters have travelled the world for more than a year to find a spectacular-sized rock crystal corresponding to the architecture of this composition. In this instance, the expertise of the stone-cutter lies in highlighting this natural wonder sometimes described as “solidified light”, which has found its way through several millennia. Such an outstanding result stems from the longstanding expertise and the great sensitivity of the master stone-cutter who reveals the intrinsic beauty of the stone and exalts its radiance. 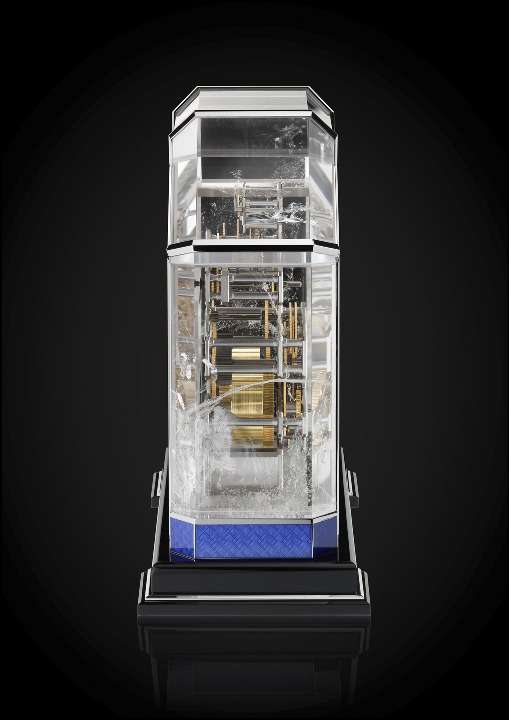 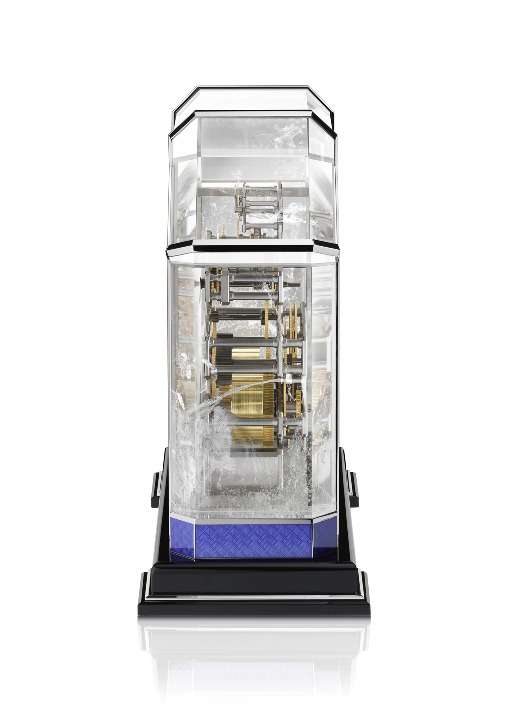 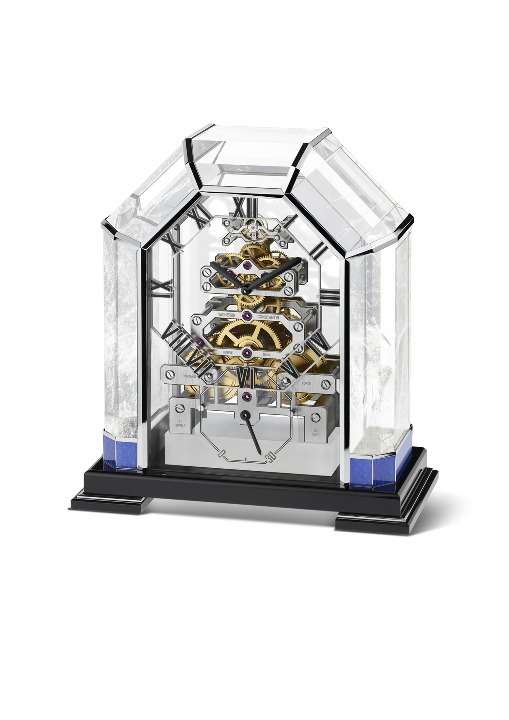 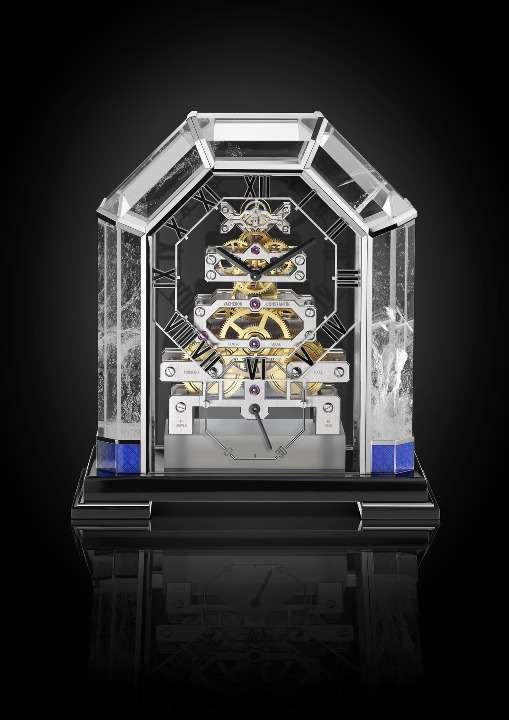 Heralding a range of splendid objects, the decorated translucent crystal clocks pay tribute to artistic crafts and to purity. Using a metal cane, the master-glassmaker “gathers” the molten crystal from the crucible within the furnace heated to 1500°C, in order to shape a 60-kilogram block using methods that have remained unchanged for centuries. The block is then left to rest for around three days to allow it to cool progressively, before being entrusted to a master-cutter who slices it into several blocks. Five facetted, polished and engraved blocks progressively form the crystal arch, while a last crystal slab is prepared to support the clock movement.

The art of uniting artistic talents for 260 years

Vividly reflecting Vacheron Constantin’s commitment to perpetuating artistic crafts, these 12 unique creations once again demonstrate the intelligence and talent of the master-artisans such as master-crystalmakers, stone-cutters, engravers, guillocheurs and enamellists. All have in their own way contributed to enhancing this perpetually changing heritage, these traditions in which the future of the Manufacture is firmly rooted and vividly revealed.

Above and beyond the work on the crystal, two decorative techniques are particularly in the spotlight on the chapter ring and the feet of each table clock: Grand Feu enamelling and guillochage. The 12 satin-brushed silver Roman numerals have been individually crafted and then coated with black Grand Feu enamel. This delicate stage requires finely controlled operations, since the melting point of enamel is 860°C, whereas that of silver is 900°C.

The facetted silver feet supporting the table clock feature 12 unique hand-guilloché motifs that shimmer with the translucent colours of Grand Feu enamel. Since each foot is an all-of-a-piece construction, the guillocheur has had to extend the décor to five faces, thereby considerably increasing the difficulty of creating the motifs. A fresh challenge that requires the master-artisans to perpetually reinvent their dexterity.

A new mechanical and architectural feat

Such a beautiful “jewel-case” naturally deserved to house a mechanism delivering exceptional performances. The transparency of the cabinet provides a delightful view of the new manual-winding (using a key) caliber made by Vacheron Constantin, openworked Caliber 9260. This openworked construction reveals the interior beauty of the movement built around seven patiently hand-bevelled bridges.
By combining a 30-day power reserve and a constant-force mechanism, Caliber 9260 displays exceptional functionality qualities entirely in keeping with the grand horological traditions of Vacheron Constantin.

The motor organ of Caliber 9260 is composed of two barrels, each with an over one-metre long spring, so as to guarantee an almost one-month power reserve. This endurance is optimised by the meticulous finishing of the components, reducing friction and thus wear. A power-reserve indicator at 6 o’clock on a sapphire crystal makes it easy to monitor the table clock’s level of energy.

Coupled with constant force, a guarantee of precision

Any mechanical device designed to measure time has a “motor organ” (the barrel) that delivers energy to a “regulating organ” (composed of an escapement and an oscillator, the sprung balance), which divides time into equal units and guarantees precision rating. The precision of a movement depends on the stability of its frequency, achieved by the regularity of the regulating organ’s oscillations. This in itself results from the regularity of the energy transmitted by the escapement to the sprung balance so as to ensure that it always oscillates in the same way and according to the same amplitude. However, the force delivered to the motor organ varies according to the degree of wind, a fact that inevitably leads to periodical variations in energy, which is often too strong in the beginning and too weak towards the end. These variations result in instable frequencies and thus variations in rate. Therefore, only a constant force can ensure a reliably regular frequency.

Various constant-force auxiliary devices have been developed to deal with the significant variations in the energy delivered by the barrel and to ensure the stable and regular oscillation amplitude of the oscillator. The principle behind these devices consists in absorbing and neutralising the excesses and variations in the driving force acting on the escapement pinion, so as to ensure that the latter can transmit equal and constant impulses to the oscillator. In other words, constant-force auxiliary mechanisms may be regarded as a kind of filter intended to cancel out the effects of the variable force that the motor organ delivers to the escapement.

There are various types of constant-force auxiliary mechanisms. Some act upstream from the gear trains, on the barrels (fuséechain transmission); while others act directly on the escapement (constant- force escapement). For its new Métiers d’Art Arca collection, Vacheron Constantin has chosen to act exactly between the motor organ and the escapement featured in the historical 1933 clock that has inspired these models.

To regulate the excess energy transmitted by the motor organ (twin barrel) to the escapement, this table clock has a subsidiary device that filters the energy delivered to the escapement. This device is notably composed of a mobile lock and release system linked to a spring, with the latter’s degree of tension regulated to contain a predefined and constant quantity of energy. In concrete terms, as variable energy is delivered from the barrels, the mobile lock and release system of the subsidiary power drive locks and tightens its spring. When the system is released, the spring is let down, transmitting only the defined degree of energy to the escapement. That is how this device serves to supply a constant force to the escapement, which can thereby maintain the stability of the oscillator’s amplitudes and thus the rating precision of the movement.

Such a mechanism proves particularly useful on a horological movement endowed with a substantial power reserve such as that of Caliber 9260. The duration of the power reserve notably depends on the length of the barrel springs. The longer the spring, the greater the number of oscillations, and hence the higher the risk of isochronism flaws.
The constant-force mechanism of Caliber 9260 endows the table clock with remarkable rating precision corresponding to less than a one-minute deviation per week: an impressive feat for a caliber with such a low frequency (2.5 Hz) and that requires winding just once a month. 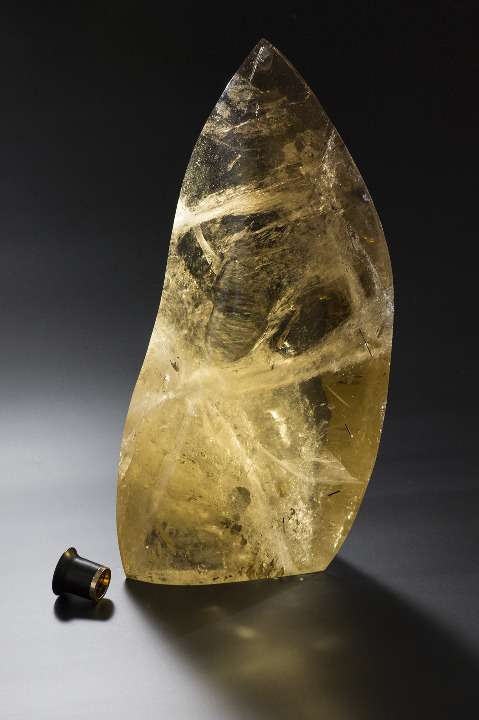 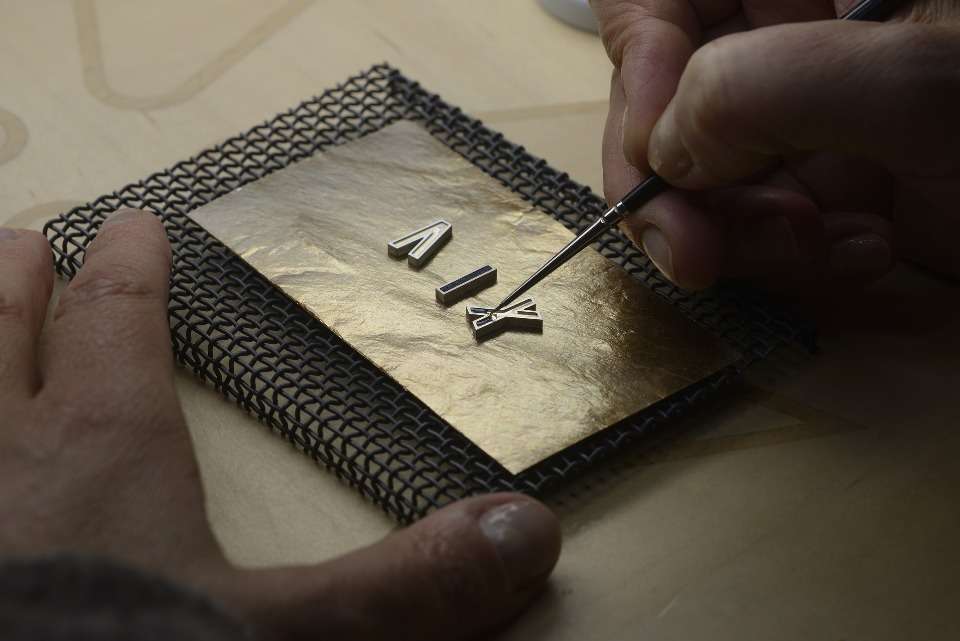 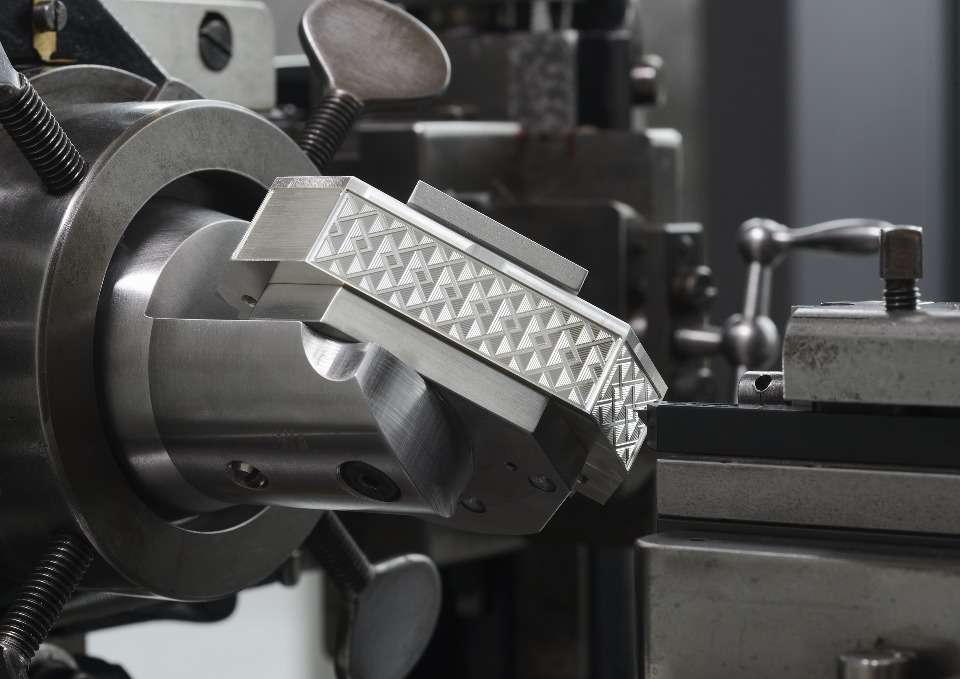 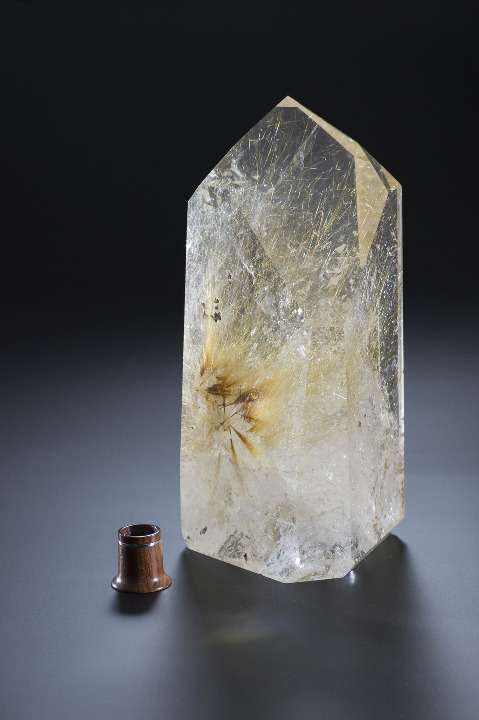