ROLEX INSTRUMENTS FOR BLOODHOUNDBristol, 30 April 2014 – Rolex, the leading luxury watchmaking brand, has revealed the two bespoke instruments it exclusively developed and manufactured for BLOODHOUND SSC, the supersonic car. True to its philosophy, Rolex has combined world class technology with exacting standards of precision and reliability to create these highly accurate instruments that will be installed in the cockpit of BLOODHOUND SSC as it aims to set a new World Land Speed Record of 1,000 miles per hour (1609.34 km/h) in South Africa in 2015/2016 and inspire the next generation of scientists and engineers.Rolex joined the BLOODHOUND SSC project in 2011 as the Official Timing Partner and thanks to its in-house engineering expertise, was in the best position to meet BLOODHOUND SSC driver Andy Green’s needs for two key cockpit instruments: an analogue speedometer and chronograph.

These two vital instruments, with characteristic Rolex analogue dials, will sit either side of Andy Green’s hands on the left and right of the dashboard. The speedometer and the chronograph will be essential and independent complements to the central electronic screens that will display data during BLOODHOUND SSC’s runs.

Building on Rolex’s legendary reliability, these highly accurate instruments will pro- vide a necessary visual reference and fail-safe back-up for some of the on-screen readouts during the two critical phases in the record bid: assisting precision braking from 1,000 mph on the 20-kilometre track and for timekeeping during the turnaround in-between the two mandatory record runs.

BLOODHOUND SSC will be fully assembled by mid-2015 and will then start running in the UK and South Africa ahead of its World Land Speed Record attempt in 2016.

Mr Arnaud Boetsch, Communication & image Director of Rolex SA, said: “As the leading luxury watchmaking brand, Rolex felt the nature and the global appeal of the partnership with BLOODHOUND SSC was of clear interest and in line with Rolex’s strategy to partner with projects that have strong symbolic value.

The BLOODHOUND SSC project is one of the most highly technological global ini- tiatives driven by a spirit of extraordinary human endeavour. The association marks Rolex’s support for projects that share a passion for performance and precision, founded on their pursuit of excellence in technology and innovative engineering.

Given Rolex’s history in the world of speed, which goes back to an association with Sir Malcolm Campbell during his World Land Speed Record successes in the 1930s, and BLOODHOUND SSC’s mission to inspire the next generation to embrace science and technology, the partnership with BLOODHOUND SSC is a natural fit.”

Andy Green, BLOODHOUND SSC driver, said: “BLOODHOUND SSC is a project with strong symbolic values, not only designing and building the fastest car on earth but ultimately inspiring the next generation to take on careers in science and tech- nology. We are delighted to have Rolex supporting this project both from a technical and inspirational point of view.

We were looking to have independent and reliable devices to measure speed and time during the record attempt. These high-precision instruments will not only give me a visual reference of the speed, both in acceleration and most importantly on braking, but also help during the precise turnaround the car will have to go through in a limited time. Given their technical and engineering expertise, Rolex was the perfect partner to develop such unique and important instruments.” 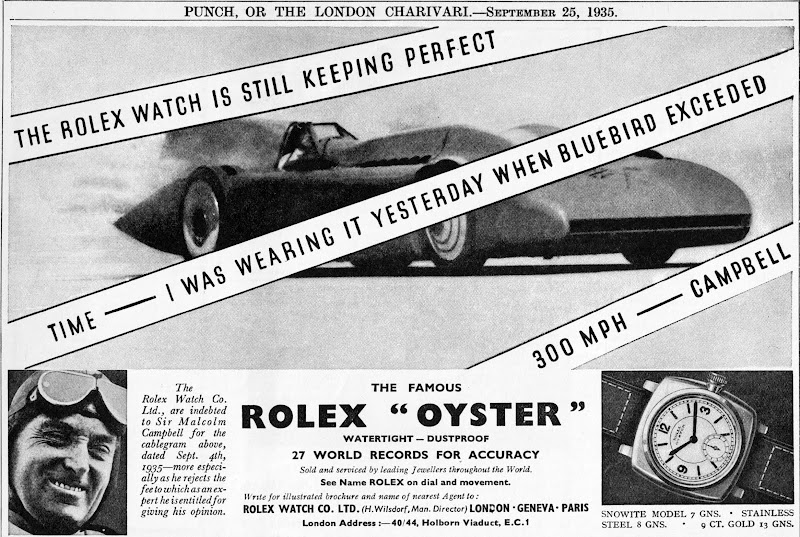