The 3 H1 Air pieces can hardly keep their feet on the ground! To begin with, they arrive together as non-identical triplets – the first time HYT unveils a complete collection of limited pieces in one shot.

Secondly, the pieces explore unchartered territory such as the maritime world or camouflage.

But the third and most surprising aspect to the air collection is that HYT presents its first classical piece! Are the enfants terribles of Hydro-Mechanics growing up? 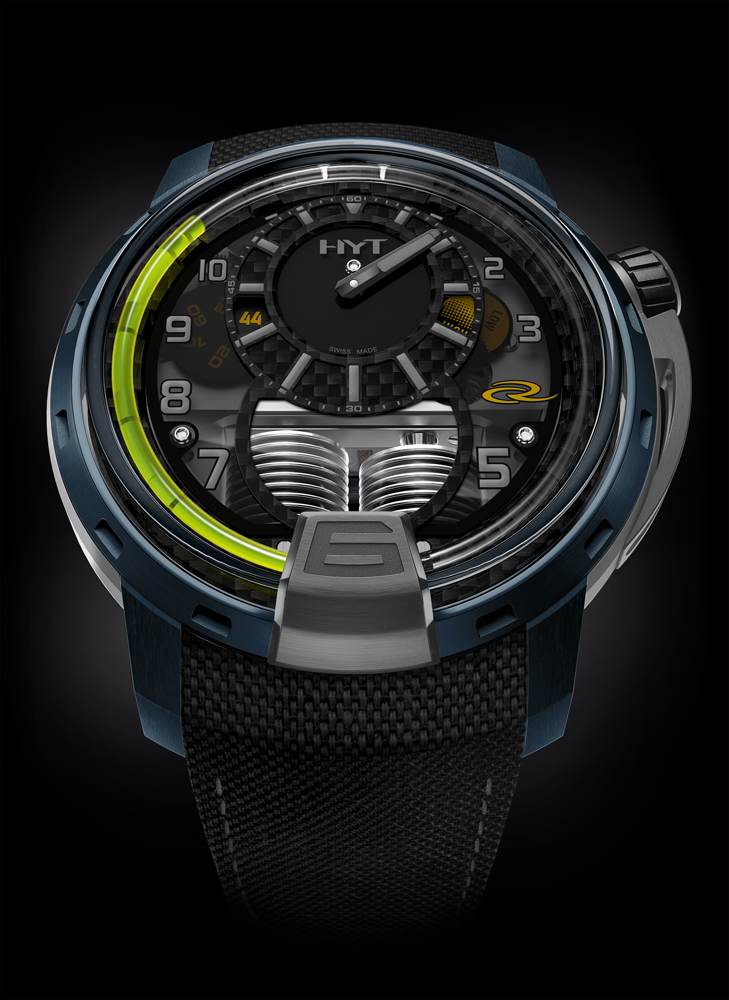 Open waters and blue skies beckon
The H1 Air RC44 stands out from the collections like no other as it is the first piece HYT ever creates as part of a partnership. More than ever ‘fluids are in our DNA’ says HYT CEO Vincent Perriard.

In saying this Perriard makes reference to the fact that since February 2015, HYT is the official timekeeper for the RC44 regatta created by Russell Coutts, 5 times winner of the America’s Cup, one of the most difficult circuits in the world. He adds, ‘for this occasion, we needed a piece that of course leveraged on our fluid technology but also ensured the performance and the lightness of a monocoque’.

The H1 Air RC44 fulfils this lofty challenge. Its movement is covered by a sapphire dial, another first for HYT. The part of the dial covering the bellows remains translucid to allow an unobstructed view of the heart of the watch. Two other un-tinted and open areas have been integrated for the same reasons of visibility: to the left of the dial to display the seconds and to the right to show the power reserve.

‘This play on light and shadows is the common denominator in all three Air pieces’ explains Vincent Perriard. These new H1s are designed in stratum, firstly with the movement, then the sapphire dial and then finally the applied chapter. Playing with these different levels allowed us to integrate new depths and a different volume and richness to the pieces’.

On the RC44 the sapphire dial is adorned with a applied chapter made of a single piece of carbon, evoking the ultra perfectionist structures of racing monocoques. 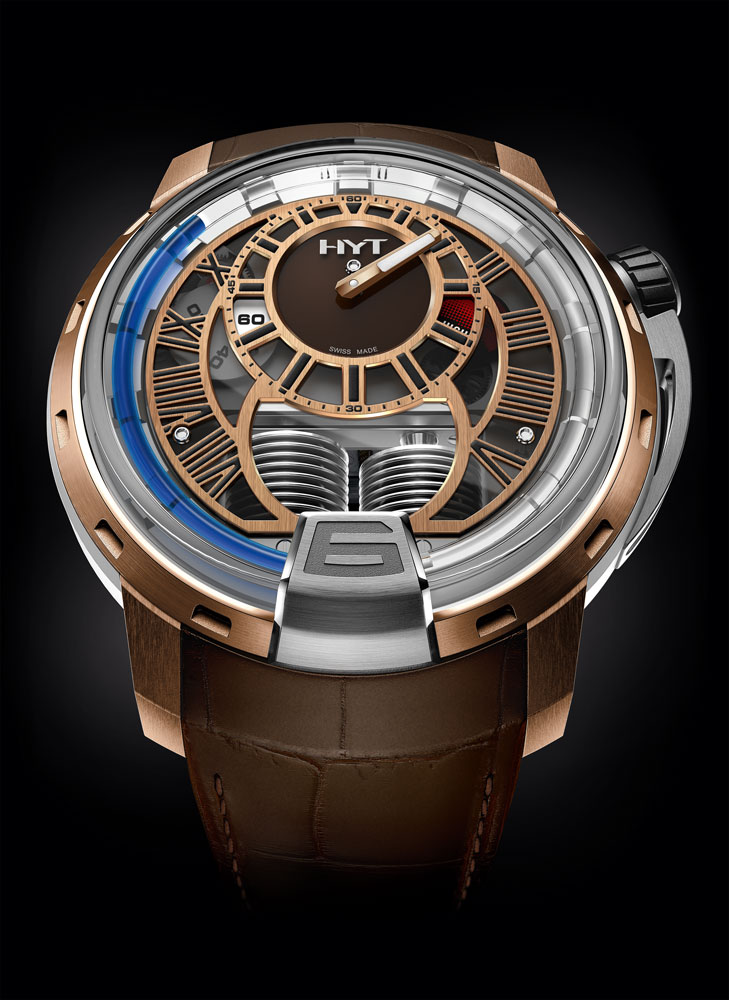 HYT’s classic class act
And then comes the Classic. ‘It is a classical piece – well for us at least!’ says Vincent Perriard. ‘We are known for creating what has never been seen and what should be impossible. The H1 Air Classic differs from anything we have done before. It is an Art Deco piece destined for the collector that is looking for classical horological codes with an avant garde technology. This H1 Classic follows our mantra: to go where we are not expected, surprise our fans from the first minute – and I think we have done this.’
For the H1 Air Classic, HYT didn’t simply recreate a traditional piece. The brand remained loyal to its codes and to its hydraulic technology: large roman numerals, gold tone, optimal visibility and chocolate tons all served with an alligator strap.

Its case is in titanium and 5N gold favouring a lightness and a resistance to the passing fancy and fashion of time. Its roman numerals are placed on an applied chapter that rests on its sapphire dial. 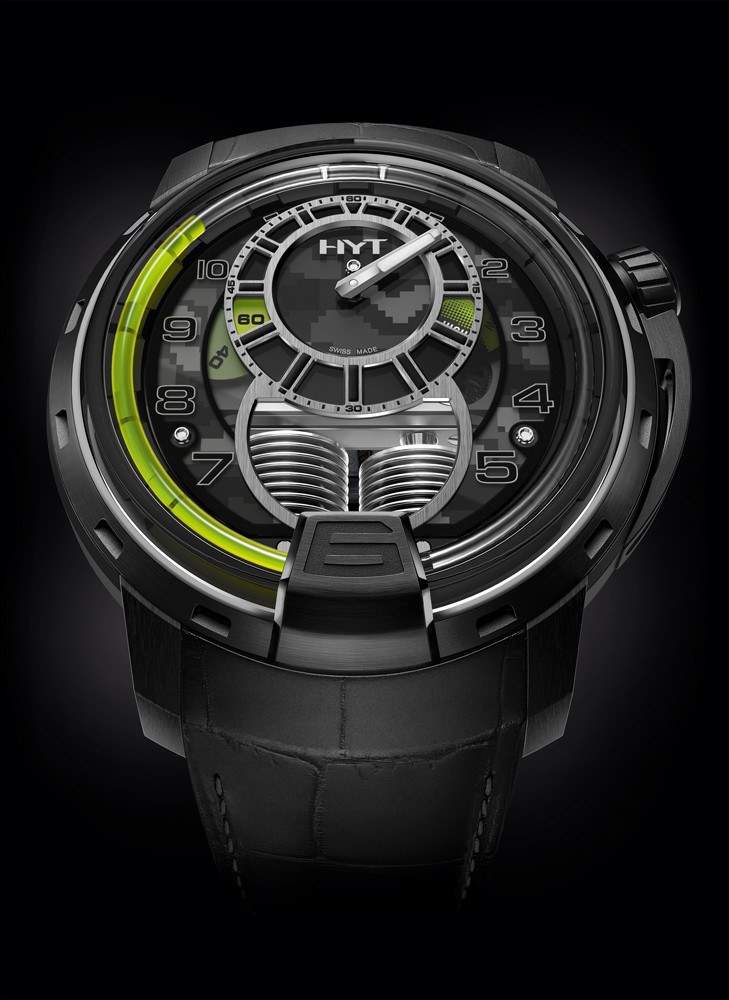 Floating on air
The H1 Air Pixel is the last piece of the collection. Its sapphire dial has an urban camouflage nuanced with tones of grey. In this monochrome universe, the liquid, the seconds and the power reserve literally spring from their aperture giving the piece an exhilirating 3D sensation. Its case is in titanium black DLC giving this last piece a furtive, modern and powerful feel. 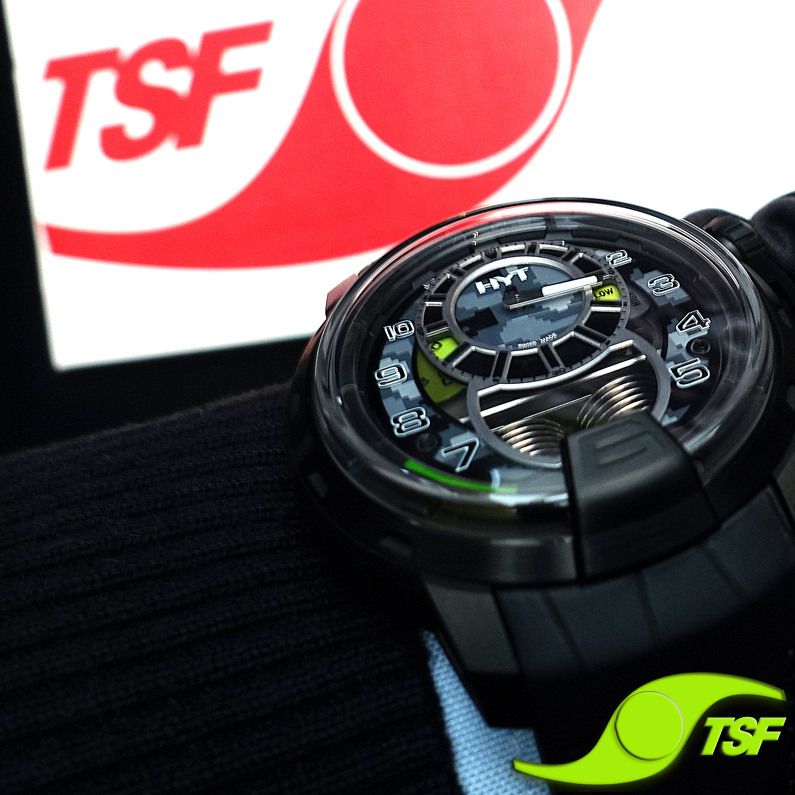